Are we finally living in the new normal?

[4th June] With lockdown restrictions ending, hopefully for the last time, we’re getting ever closer to finding out what the new normal may actually look like.

Consumer behaviours changed drastically last year with a range of challenges affecting product choice; availability, price and a change to behaviour amongst them. According to Nielsen data from the UK, the long-awaited reopening of indoor hospitality did have an impact on take-home grocery sales, falling 6.7% in the week ending 22nd May. Despite this, they are still up by 11% on the same period in 2019, demonstrating what Nielsen refers to as “entrenched behaviour changes”.

Industry leaders have been warning of this for some time, with changes over such a sustained period of time affecting our long-term behaviours and creating new habits. Some consumers may have discovered that they can whip up a quick meal rather than relying on a restaurant, others may be feeling the financial pressure Covid caused.

Online shopping volumes increased drastically last year as physical retailers were closed, which appears to be a long-term switch in behaviour. 28% of UK households shopped online in the last week, the same figure as a year ago. This is despite shoppers feeling more confident returning to physical stores, as demonstrated by Deloitte’s State of the Consumer tracker, which found 68% of UK adults feeling safe going to the store, up 3% in the last month and 24% since the start of the year.

The appetite for hospitality is clear in Northern Ireland, with Kantar reporting that take-home alcohol sales fell by £14m in the 12 weeks to May 16th, down from £134m in the same period last year to £120m in 2021. The reopening of bars is likely to have caused some of this decline however the weather is a contributing factor. Kantar also said the slump could be explained by the poorer weather of recent months compared to late spring 2020, when many of us took to al fresco drinking during good weather in the early months of lockdown.

Grocery shopping trips in NI have decreased by 1.7% compared to last year however basket totals are up. Tesco remains the most popular supermarket, with 35.5% share, followed by Sainsbury’s with 17% and Asda at 16%.

Basket totals in Tesco stores rose by 18.7%, the highest growth amongst all retailers and the equivalent of shoppers adding an extra three items to their baskets.

When it comes to basket contents shoppers in the UK remain brand loyal, with the majority choosing well known names over the store label items. With trust a key decision-making factor in brand choice, according to Deloitte. 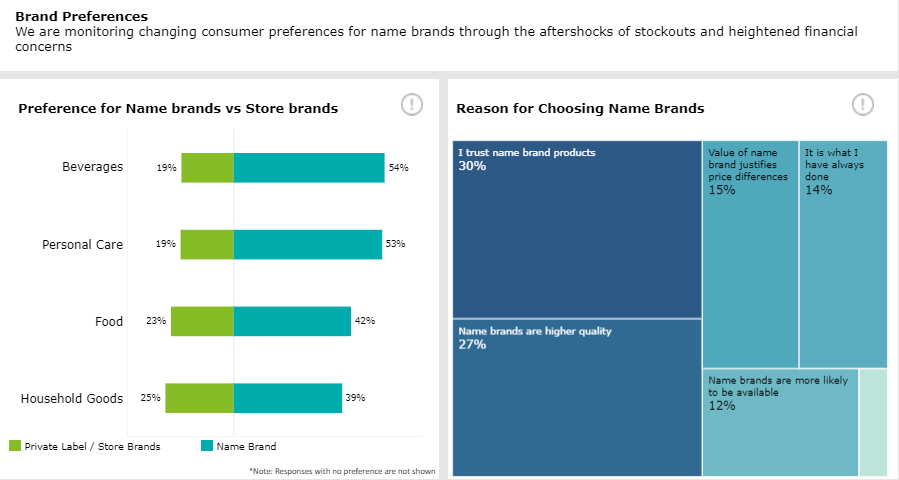 Now Near Next – Public transport use in Belfast picks up

Now Near Next – Up, up and away