[10 July] Mobility data once again shows an increase in activity across all the areas we track. The reopening of bars, pubs and restaurants will help to revitlise town and city centres, particularly in the evenings. Additionally, the beauty industry has largely reopened, and gyms will follow this weekend [from 10 July]. This phased approach delivers increasing audiences week on week. The graph below looks at daily footfall across the UK, showing a modest rise in WoW footfall, however the results belie the impact of the reopening of the hospitality and beauty trades, as well as eased travel restrictions in Scotland. The combination of these changes resulted in a rise in footfall over the weekend which was more than twice that seen from Monday – Friday of that week.

The Office of National Statistics also released insights looking at retail environments, with growth strongest in high street locations. This is partly due to the reopening of bars and restaurants within these areas. Visitors to shopping centres remain constant, while retail parks saw more volatile footfall patterns. 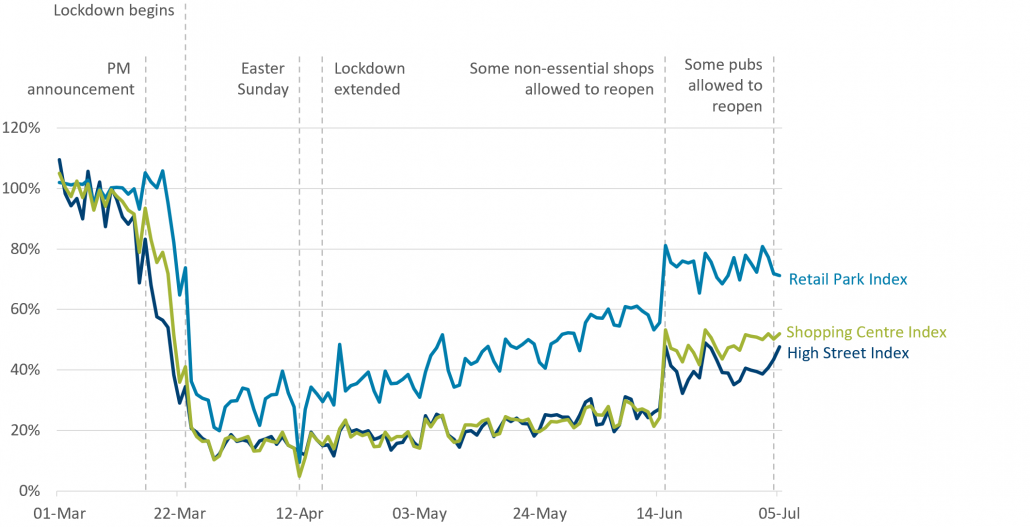 These footfall patterns are largely replicated in the Google mobility data, with continued growth in retail and recreation locations which saw 10% WoW growth. Footfall in parks and beaches is more changeable, however the weekly average remains high, at 98% of the pre-pandemic norm.

Driving activity remains at high levels, with the 7-day moving average at 112% of the baseline. The week on week activity has also increased by 6% and has now been consistently above the baseline since the week ending 21st June.

Now Near Next – Economy boost to entice spending

Now Near Next – Innovation is key to success
Scroll to top