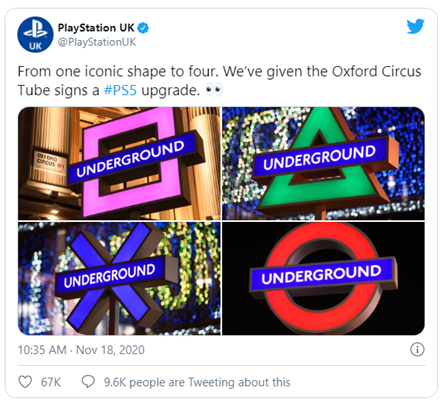 [27 November] There are some things that need an advertising push in advance of a launch, where lesser known products rely on ads to really build sales. For anyone living under a rock, Sony’s Playstation 5 console launched this week, and swiftly sold out. Gamers trying to get their hands on the new item were left disappointed, while some appeared on eBay with bidding in the region of £2,000.

Creating hype wasn’t required to boost sales of the product, however an innovative OOH campaign brought the launch to the masses and generated PR coverage across industry publications and social media.

A 48-hour takeover of the London Underground saw five stations rebranded with the Playstation’s iconic symbols; a green triangle, pink square and a blue cross augmenting the Underground’s signature red loop. Station interiors were rebranded too, with the Bakerloo, Victoria and Central line platforms decorated with walls and signage reflecting the playful campaign. Several stations were also renamed after high profile titles set to launch on the PS5, while a global light installation took over the Picadilly Lights.

Not only does the innovative campaign push the boundaries of creativity and activations but demonstrates OOH’s ability to generate considerable PR coverage and online conversations that extended the visibility of the campaign far beyond its geographical reach to a much broader audience at a time when much of England is in lockdown.

1 in 4 billboards has been instagrammed

Netflix is also a household brand that employs OOH to amplify messages through online user generated content. A Mediatel webinar on The Future of Media highlighted research from Nielsen that one in four billboards has been instagrammed.

As we approach a time of heightened restrictions in Northern Ireland, investing in Out of Home has more value than just those who see the campaign, it has the ability to reach far across the country through our social media networks and word of mouth. The possibilities for special builds and innovation are limited only by imagination, and consideration should be given to the opportunities Out of Home delivers in an online and offline world.

Now Near Next – Impact of a cashless society