Driving at 91% of baseline

[4 December] Audience movement in Northern Ireland has been somewhat impacted by the increased restrictions which came into effect last week. Our data, from Apple, shows a slight dip in the weekly average however it remains high, at 91% of the baseline norm, however the figures include a few days of heightened mobility immediately before restrictions came into effect. 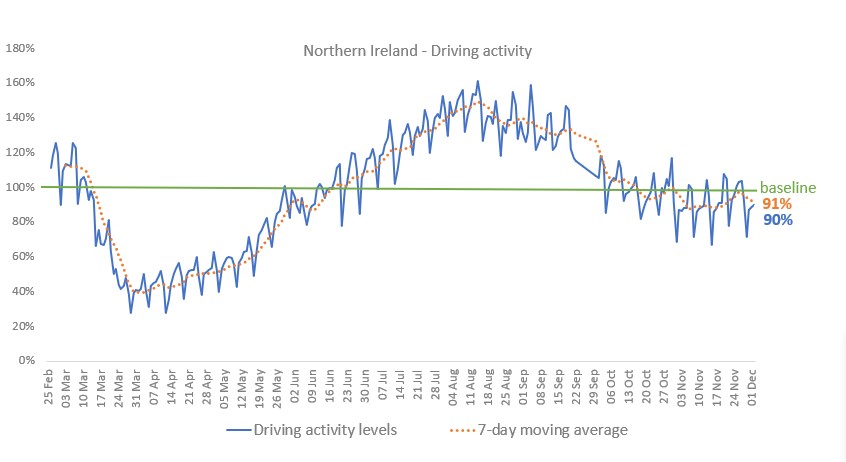 Retail and recreation averages at 80%

In retail and recreation levels, we see average mobility at 80% of the baseline, according to Google data. Thursday 26th November saw a peak of activity, at 5% above baseline, however subsequent days saw footfall drop. It’s not all negative however. The first day of restrictions on the retail sector, Friday 27th November saw footfall at 60% of baseline. Compared to an unrestricted day (Friday 13th November), where mobility was at 73% of the baseline, it’s really not a significant enough drop to cause major concern.

The Grocery and Pharmacy location footfall data also remains high, with the weekly average at 99% of the baseline, an increase of 5% week on week. Despite being unaffected by the restrictions, shoppers visiting other retailers in advance of restrictions may be responsible for a peak in activity on 26th November, where footfall was 6% above baseline.

In recent weeks, Devolved Governments have announced changes to the social bubbling (or baubling, if you will) arrangements. A festive amnesty will enable people to travel and spend time with family and friends for several days. To facilitate increased demand for air travel between London and NI, Loganair announced extra capacity on the London Stanstead – City of Derry route. The festive flights are added to the schedule on selected dates between 22nd December and 4th January.

Now Near Next – OOH can build confidence and awareness ahead of vaccine...

Now Near Next – Shopping habits will be different
Scroll to top